Rock on the Range, Day 2

Yes I am a slacker... ;) It's been nice outside and I didn't want to touch my computer also, after being on one all day at work... Anyways, moving on! 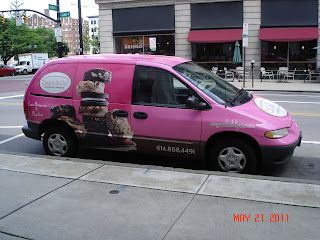 Well first off, this is a food blog, so that first! When we were walking to Michael O'Toole's, I spotted Sugardaddy's Sumptuous Sweeties that Matt & I saw on Bobby Flay's Throwdown a while back...It was already closed for the day so we decided, or I should say Matt decided ;), before we headed off to the concert the next day, we were going to stop by, since it was 2 blocks from our hotel.

The store we visited was a small store front with a bunch of goodies inside! Our friend ended up getting a brownie sundae. Matt and I walked away with a half dozen of brownies and blondes. We had the Caramel Brownie, Fiery Brownie, Chai Spiced Blonde, 2 Tahiti Blondes (which was the flavor on Throwdown) and a Drunken Chunky Blonde. I also picked up a Tahiti for my mom. Well I'm sad to say I did not take any pics of the brownies and blondes.... They were waaaay too good and were gone before we knew it! Defiantly will have to order some online as a treat or stop by when we are out that way again!

So onto day 2 of Rock on the Range! So we get to the stadium earlier than we did on day 1... we hunted out the parking spot from the day before and tailgated for a bit before going into the venue. 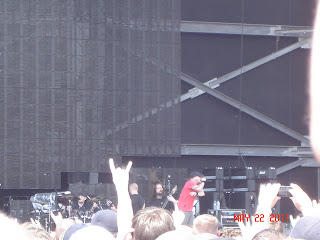 The first band we saw for the day was All That Remains on the main stage. I think this was my first time seeing them live... I can't remember if I have seen them at maybe Mayhem in the past... Anyways, they put on an awesome show and also played a few new tracks off of their new album.

After ATR the bands playing the FYE and Jagermeister stages, we really didn't care for... so we stayed at the main stage and moved up a lil further to grab a better spot... Which we ended up staying at the main stage for the whole day, since all the bands we wanted to see where there. 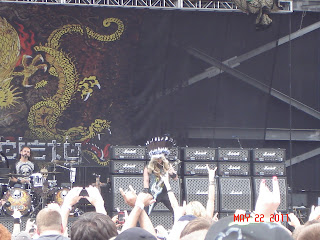 Next up was Black Label Society! Awesome Awesome show! Zakk Wylde is one badass guitar player! He came out with his head dress on, which I got a pretty good pic to your right ;) I think Zakk went on to play a 10 minute guitar solo towards the end of the set, which put all of the other guitar solos to rest!

The crowd was still pretty mellow at this part of the day, but a few pits and body surfers started to surface.... 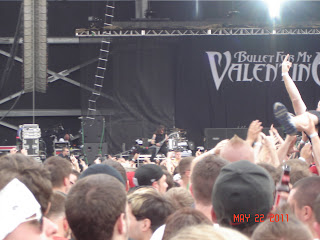 Next up was Bullet for My Valentine... This is where the day started to get crazy!! Bullet played a really good set and was way better than I thought they would be live. They really got the crowd going! 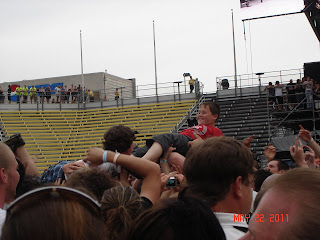 I didn't get to take too many pics for the rest of the day, since people started to crowd surf like crazy! I did snap a few of the people who made it through the crowd. I had to take one of this kid.. He was nervous as hell when he first started but was loving it when he got towards the stage. 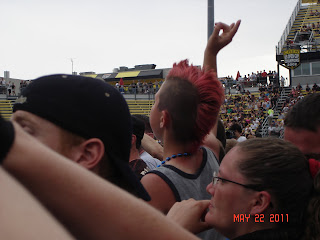 There was also another kid standing next to us, that was probably around 9 years old... He was really getting into the show and had a pretty cool Mohawk! 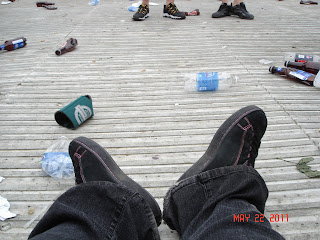 After Bullet, our feet started to hurt... remind me to get insoles for the next concert! As nasty as the ground was, we sat down to take a load off of our feet. The bottles in this picture does not do justice to the amount that was on the ground during day 1... They finally got smart and had people come and clean the floor between shows. We knew this was probably our only chance to sit and take a break because the rest of the bands were all headliner acts.

Next up was Puddle of Mudd, who was filling in for Stone Sour. Stone Sour has to cancel last minute due to their drummer having a stroke. 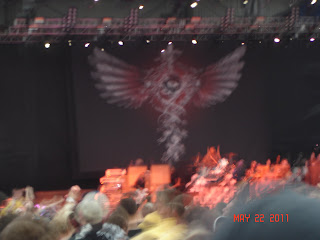 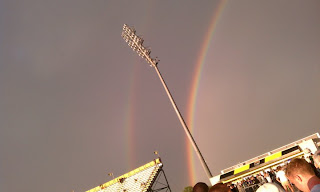 I am not a big fan of Puddle of Mudd, but let me tell you they put on one hell of a show and know how to pump up the crowd! My pics didn't come out great... as you can see... Plus it started to rain, coincidence, eh?? To make it more ironic, it only rained for their set!  Towards the end of their set, they played the song "Psycho" and the lead singer came out into the crowd. We were next to the sound stage, so we thought he would come to where we were standing and then go back to the stage... We were wrong... He walks through the crowd up into the stands, makes his way back into the crowd and back to the stage... Security didn't look too happy about his trek, but it was pretty neat... I wish I got a pic of him walking past us, which he did twice within arms reach, but it was pouring! At the end of the set, it stops raining and what do we have?? A Double Rainbow!! What does it mean?!?!?!? ;) 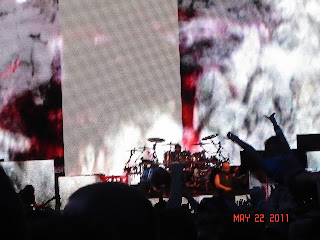 Next up on the bill... DISTURBED!! For any of you that know me...they are one of my favorite bands... Back in the day when they were coming on to the scene I promoted them before their first CD hit the stands. I met them several times and they are a great group of guys.. As a matter of face I think Mike still owes me a quarter that he borrowed to play foozeball when we were backstage at Ozzfest! ;) Anyways, my pics came out as all blurs pretty much.. I think we had a crowd surfer farm behind us.. Out of all the concerts I've gone to, I've never witnessed as many crowd surfers! Let alone guys who were a little too big to be crowd surfing... Which leads to me seeing my life flash before my eyes.. Pretty much during Disturbed's whole set I had my back to the stage to watch for crowd surfers... Well one guy was probably about 220 decided to crowd surf.... bad idea! Before I know it this dude is coming down on top of me and my head is going towards the metal rail that is in front of me.... Thank god for one of the guys standing next to me who grabbed my arm and pulled me away from the rail and all the other guys who got the dude off of me! After Disturbed's set the guy who grabbed my arm was walking away.. Matt and I stopped him to thank him to pretty much saving me... So if you out there, guy who saved me... Thank you again!! Besides that drama Disturbed put on one hell of the show, as always!! 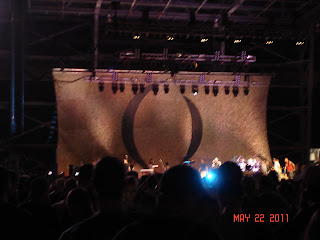 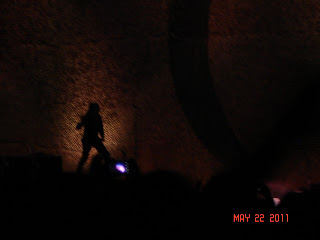 Now on to the headliners... A Perfect Circle! Now, going from the craziness of Disturbed to A Perfect Circle, I knew what I was in for... I've seen APC before and it's a mellow show and if you are an APC fan, you know that Maynard, the lead singer, does not show himself on stage. I was shocked by the amount of people who left during their set! Then again it was all the better view for me... This was the first date on their tour and we are thinking about seeing them again when the come to the Burgh on the last date of their tour. Anyways, by the end of the night we were beat but I think APC did an amazing job. The set was very simple, but that makes you focus on the music even more. I did manage to get a snap shot of Maynard's silhouette. All in all A Perfect Circle put on an amazing set, no matter what other people were saying... Stop for a moment and listen to the music... You might be surprised!

So now that I've written a small book.. I think it's time to call it quits with this post ;) This post also took me two days to type up.. haha... Anyways, we had an awesome time at Rock on the Range and in Columbus... OH!!! one last thing... Guy Fieri from Diners, Drive-ins and Dives ended up staying at our hotel! When we were leaving we saw his tour bus parked in the back of our hotel. He was in town doing a book tour and the show was that Monday night we were leaving! Wish I would of known, probably would of stayed another night... Oh well!

Well I'm outta here... and if you have read this post this far, you are a trooper and should "follow" me on here and "Like my facebook page! ;) Ciao!
Posted by Tree at 8:52 PM