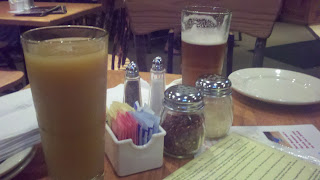 Almost a month ago Matt and I went to Rivertown Pour House for dinner. Being the slacker that I am, here is my review ;)

Of course we started off with a beer... I can't remember the name of what Matt had, neither can he, besides it was named after a girl... I had the Pineapple Under The Sea ;) Which we both enjoyed but my pineapple was a little cloudy compared to when I first had it a few months prior.  Rivertown Pour House only serves beer that they brew in house. 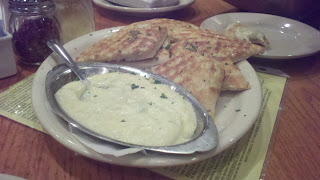 We also ordered the Pourhouse beer cheese dip... It was pretty damn good... With the beer and the cheese dip I hardly had any room left for my entree and the same went for Matt! 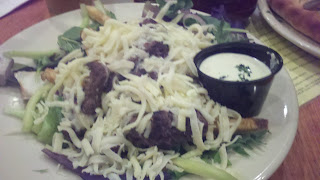 I ordered the Yinzer salad with steak and Gorgonzola dressing... If your from the 'burgh, I don't have to explain... but for those of you who are not, it's a salad with french fries on it... Healthy, i know... haha... They did go a little overboard on the cheese, but it was pretty good. I ended up taking most of it to go. 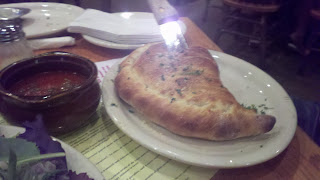 Matt ordered a Stromboli, which was delivered with a nice big steak knife in the middle... He can't remember what was in it, but it was good.... He ended up taking half of it home too.

Overall this place get's an A in my book. It's a great place to grab a bite to eat and spend some time with friends and family. Plus they have a great beer selection!

Oh, and a reminder tonight for everyone in the 'Burgh, that even made the Nightly News on NBC, which I got a kick out of....  Prepare for mayhem, explosions and gun shots... well fake gun shots... filming continues on the new Batman movies The Dark Knight Rises tonight... I can't wait to see this movie in theaters next year! I love all of the Batman movies and I can't wait to see the 'Burgh as Gotham City! I wish I could of talked Matt into being extras for next weekend filming... I think it would of been pretty neat to know you were part of a movie, even though we would of been in a sea of people... Oh well...