Last Sunday we had dinner with my mom at Tolerico's in Monroeville. This was not our first time there. We've gone in the past and enjoyed their food... but this visit I wasn't too impressed.

We were greeted and sat at our table and was handed a dinner menu, . Our waitress comes and takes our drink order and we take a look over the new dinner menu, we were not told the specials, which were displayed when you come in but could hardly read the board.... Their choices were pretty restricted on their dinner menu. The menu is made up of dinner entree's only... No salads, sandwiches or pizza. Now, in my opinion if you are going to have a different menu for dinner... throw a little bit of variety in the mix... All three of us were not finding anything we wanted on the menu... We really wanted their pizza to be honest.

The waitress brings over our drinks and my mom asks if they have a different menu. The waitress explained to us how they now have a lunch and dinner menu. We asked to see the lunch menu, since it had what we were looking for, and she brought it to us....

I do have to make a side note about their new drink glasses... not too impressed with the advertising on them... It doesn't go with the feel of the decor of the restaurant. Maybe if they were used in the bar section but not in the dining room... Kind of tacky.

So we look over the lunch menus and I started off with a small house salad with their balsmic vinegrette and my mom got their soup of the day, seafood chowder. My salad was pretty good, crisp lettuce but had two HUGE croutons, which were a little hard to cut down to size. The seafood chowder was good, kind of wish I got that instead of my salad.

For our entrees, we decided to get two different small pizzas and split them.

My mom's choice was the Chicken Alfredo White Pizza, which had grilled chicken, alfredo sauce, spinach and feta cheese. Tons of spinach on here, a little too much cheese, felt like the crust was a little bit lost but was really good. 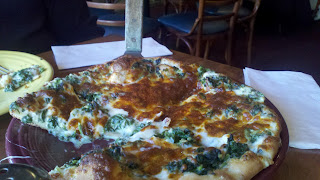 Matt and I chose the Abruzzi, which came with grilled chicken, mushrooms, peppers, onions and mozzarella. This was really good... not too much cheese and could really taste the crust, which was awesome! 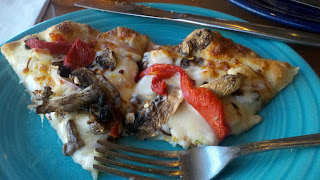 The small pizza's are a 4 cut but is pretty much an 8 cut.... the two piece in the picture above was considered one!

The food was good over all, but the atmosphere seems to be lacking and kind of going down hill from my previous visits. Our waitress seemed like she really didn't want to be there and there were tables that had not been cleaned up after the people were done eating and took a while for them to be cleaned. Which is a turn off to me. Also I am not too thrilled about the two different menus.... If you go around dinner time and want a salad, sandwich or pizza... Make sure to ask for their lunch menu