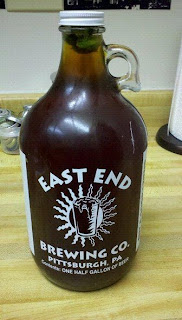 Yesterday Matt and I went to the Pittsburgh Public Market, it's been awhile since we've been there and we were looking for something to do... We ended up getting our growler filled, from East End Brewing. We got their Big Hop Harvest, with fresh hops added to the brew. I swear the beer got darker from the time it was filled to the time we got home... maybe it was from the fresh hops added to it?? Anyways, it was pretty darn good, we still have a little under half of the growler left.

We also picked up a pieces of regular baklava and pistachio baklava from the Baklava Company, a couple eggplants from Clarion River Organics and a black bean and cheddar and veggie pasty from Blighty, which will be dinner one night this week.

So we're hungry.. Did not eat breakfast and it's about 2:30pm.... where to go??? The strip is packed... so we scratched anywhere down there... Hmmm what about squirrel hill?? ok, we drove to Squirrel Hill.... forget that... I kept driving to Regent Square... that was another parking disaster... I went back down the main drag and still no parking spots. So on we went, to where? We don't have a clue!

Before we know it, we're in the ghetto... a boarded up ghetto.... so onward we went and ended up in East Liberty.... We're at a light and I take my phone out and go to my urbanspoon app.... Max's Allegheny Tavern comes up... I saw a special about 2 week ago on WQED about the restaurant... So off we went to Max's!

After a few wrong turns, we made it!

When we walked in, I thought we would be seated in the bar area but we continued to walk and were seated in the dinning room. It was pretty quiet, there were a few other diners besides us. 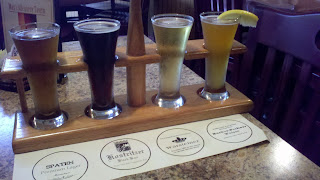 Our waitress came over to the table, I wish I could remember her name, she was great.... so, she came over and greeted us and asked what we would like to drink... we had no clue so we both ended up getting the German Beer Sampler.... I was surprised how good the brews were... even the dark beer, and I am not too big on dark beer.

We look over the menu and skip over the American food and go right to the traditional German food... Oh lord, what should we order??? Everything sounds good, but what to choose! 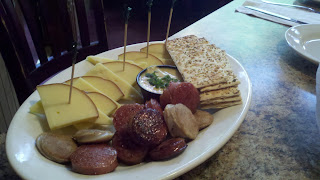 So we started off with the Sausage & Cheese appetizer, which included knockwurst, bratwurst and kielbasa with wedges of Jarlsburg Swiss and Smoked Gouda Cheese and crackers & honey mustard.... I don't know if we were starving, but it was soooo good!! 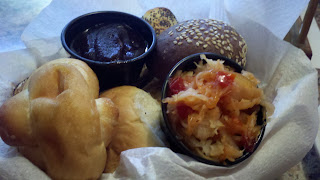 Then our waitress brings over a basket of assorted bread with apple butter and some kind of slaw... Whatever it was, it was good!

We finish the sausage and cheese, sample our beers and out come our dinners..... The portions were huge! 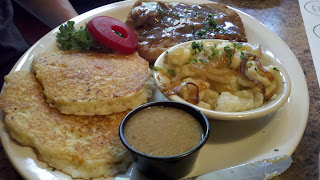 Matt ordered the Jager Schnitzel with potato pancakes and Spatzle, which he has no clue what Spatzel was when he ordered it :) 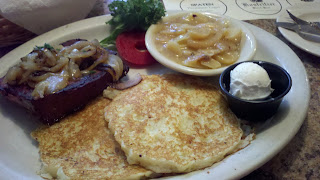 I ordered the Leberkase with potato pancakes with sour cream and German potato salad. I was a little bit nervous about the Leberkase, but it was so good!

Although I think Matt enjoyed my Leberkase more than his Schnitzel, both were amazing!

Ok... so, if you know Matt... he's not much of a sweets person.... We are almost done with our meals and he said he wanted dessert.... Oh lord, has hell frozen over and there was no way in hell I can eat another ounce, I'm thinking.... 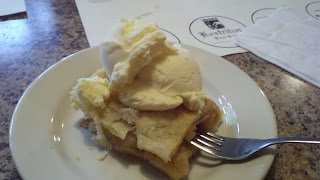 Matt is insistent on getting the apple strudel with ice cream for dessert.... ok what the hell... since this was our only meal for the day, he ordered the Apple Strudel for us to share.... The waitress walks out with 2 plates... maybe she didn't hear him that we wanted to share?? She ended up having the strudel cut in half and a scoop of ice cream for each of us. The strudel was very good... Matt was in heaven! :) 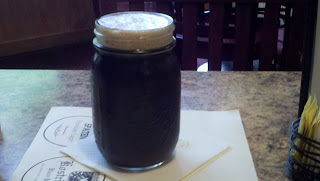 It starts to rain like crazy outside.... I'm still eating my strudel and Matt's done eating and ends up ordering a Kostritzer Black Beer, which was his favorite from our sampler, and I ordered a water to wait out the rain.... I'm so stuffed at this moment I did not want to move.... I don't think Matt wanted to either....

So, the rain lets up a little after Matt is done with his beer and we head back home...

I was really impressed with the food from Max's Allegheny Tavern and it is surely a hidden gem! Matt is still talking about the tavern today and how good the food was and how he can't wait to go back. If you are not sure were to grab a bite to eat when your out, make sure to check out Max's... Defiantly a place that we will be going back to!!