So it's been a while... but I'm back, using my fiancés computer for now...

I haven't been cooking much lately... Work was a little crazy for a while and I had a business trip to Chicago... So when I cooked, I cooked a lot... So we've been eating a lot of leftovers and now Thanksgiving leftovers...

So where to start?? How about back before my computer died... 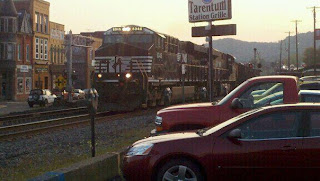 Back in September I met my mom for dinner at the Tarentum Station... While waiting for her a train happened to be passing by the station and I snapped the pic to the right. The food was really good... We both had a fish entree... I had the daily special, which I think was a scrod Romano and risotto as my side.. The risotto was really good! I could of just ate that and I would of been happy. The only draw back is the noise in the restaurant... It is an old train station and open inside but it is hard to hear whoever you are sitting with talk, if they have a full house. Other than that, this place is a  go!

In October Matt's Sister came into town... We hit up a lot of places to eat around here... let's see what I can remember :) The only bad thing about that week, I had a bad col.. Great first impression is what I was thinking... but I survived :)

We spent one day walking around downtown Pittsburgh.... I think I saw more of the city that day than I have ever seen.... We ended up in Market Square to grab a bit to eat at NOLA on the Square for lunch. We wanted to sit outside but it was packed, so we got a table outside. I ended up getting their Brasserie Steak Salad, which was made up of Seasonal Greens, Hanger Steak, tomato, Hard Boiled Egg, Fresh Mozzarella, VooDoo Fries and Vinaigrette. Very good and the fries were really good too.. This is a place Matt and I have on our list to go back to.

That evening we went to Max's Allegheny Tavern... Which was a hit with everyone and always was with Matt and I... We left with full bellies!

Next up was Fuel & Fuddle in Oakland, we took a break from the Carnegie Museum and walked down to grab lunch. We split the baked brie... I'm not a fan of Brie, but this was good.... I had the holy guacamole salad, which was HUGE but also good... I ate about half of it.. it had aeared baja style beef with corn chips, fresh salsa, sweet corn, monterey jack and cheddar cheeses and sour cream over mixed greens with guacamole dressing.

After lunch we went back to the museum and there is a really neat photo exhibit of Pittsburgh... I think it was my favorite part of the museum... I'm a sucker for local history.

One day for breakfast we hit up the Square Cafe. I've always wanted to go here and failed once due to parking and my lack of skill on parallel parking... I had zucchini fritters with a cucumber salad.. really good... I was also looking forward to having a Red Ribbon Cherry Pop... but they were out of stock :( One of my family members works for this company and I love their pop... I do miss their Chocolate Pop! I loved it when I was growing up.... Anyways, the food at Square Cafe was really good and on our list to go back to... At least now I know you can park on side streets in the area and I don't have to worry about parallel parking on the main street ;)

Well I'm going to stop here for tonight.. I'm getting pretty tired and going to hit the hay soon... I'll pick up tomorrow where I left off ;)