Rock on the Range, Day 1 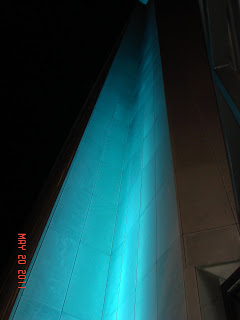 Well, I'm still recovering from last weekend. We took a road trip to Columbus, OH to go to Rock on the Range, a 2 day concert.

Matt, his friend John and I drove up to Columbus on Friday afternoon and we walked around downtown Columbus.. Which I think half of the city is owned by Nationwide Insurance. The picture to the left is a building at night light up in the plaza of their world headquarters. The headquarters took up about 3 blocks of the city, including the sports arena and they also have a Children's Hospital named after them...

Moving on! The first night we explored downtown... Majority of the businesses were closed, except for a few restaurants but nothing was catching our eye.... 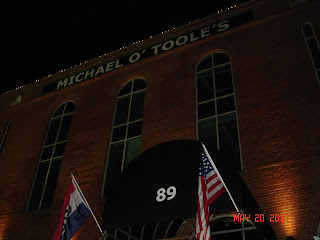 We were looking for a hole in a wall, where the local's go, but nothing in site. So on we went. We eventually came across Michael O'Toole's Irish Pub & Bar. Which turned out to be pretty darn good! We ordered their Spinach & Artichoke Dip with homemade tortilla chips to start. For my entree I ordered Miner's Chicken, which is Char-grilled, barbeque glazed chicken breast topped with two crisp onion rings. Served with whipped potatoes and coleslaw. Super yummy!! I also had a Rouge Dead Guy Ale.. They have a wide selection of MicroBrews plus their own house MicroBrew. Matt ended up getting the Prime Rib French Dip and I can't remember what burger John got... but we were all extremely satisfied! Their food was too good that I didn't get any pictures, just the outside of their building.

So on to Rock on the Range! The first day we went later in the day, since the bands we wanted to see didn't start until 3pm... Kind of a bad mistake... We drove around for about a half hour until we found a parking space. The concert was held at the Columbus crew stadium and the lot was packed, plus people do not know how to park, but I digress... We found a spot near the campgrounds, but was about a half mile, well maybe a lil less, from the stadium. Which turned out to be a good spot at the end of the night, since it was right next to the exit, we didn't have to wait 13 hours to get back to our hotel! 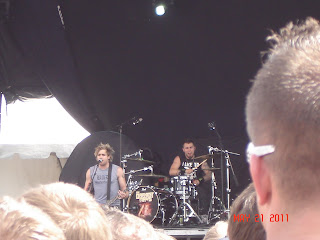 The last time I saw Staind, they kind of went down hill... Their performance on Saturday was killer! They played a lot of their older tracks and Aaron was getting into it like he did when they first came onto the scene. Felt like I was 17 again when I saw them at Metropol with Tree. *wink wink maybe the lead Singer of Tree gave me my now nickname* 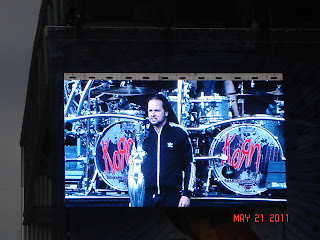 Next up was KoRn!! Again a great performance! I lost my concert virginity to KoRn, when they did the first Family Values Tour back in '98. I was onstage with them in the "KoRn Kage" at that show. It was hard to get a good picture of the stage so I snapped a pic of JD from the monitor on the side of the stage. They did an awesome medley of songs off of "KoRn" and "Life is Peachy". They also did a cover of One by Metallica.

By now my feet are starting to hurt... I knew I should of bought insoles for my shoes! :oP 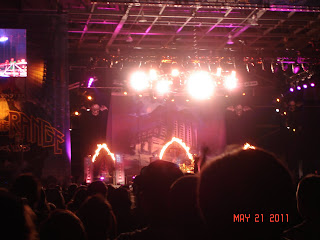 It's 10pm and Avenged Sevenfold hits the stage! Talk about getting the crowd pumped up! They came out to "Nighmare" and the crowd went nuts! It was kind of bitter sweet for Avenged... The last time they played Rock on the Range they played with their drummer, the Rev, who passed away in 2009. So they did a nice tribute to him. Also M. Shadow's blew our his vocal cords a few days prior to this show and they cancelled their show before this one. He didn't talk for 3 day so they would be able to play at ROTR. Avenged put on a killer show I loved their stage set up, wish I could of taken better picture but what I have will do. 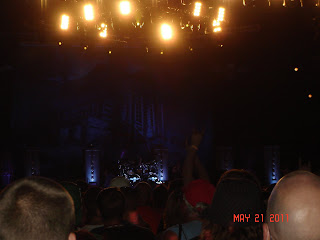